recent to our menu
January 14, 2022  by Margaret Kolkowski

The British Journal of Sports Medicine has published a study on the health benefits of tennis. Click here to read!

Tennis participation has skyrocketed during COVID-19 pandemic. Will it pay off for Americans down the road?

“[A]ccording to an annual study commissioned by the Physical Activity Council (PAC) and shared with USA TODAY Sports, tennis has boomed during the pandemic with an estimated 21.64 million Americans picking up a racquet in 2020, up 22.4 percent after several years of stagnant participation.”

This is great news for the tennis community!

You can find the full article here.

Beginning June 19th, the following are the schedules for the 4.5 and 4.0 Doubles Clinics:

Thank you for your patience and hope to see you Around The Netpost soon!
Rick Rojas
Director of Tennis, Radnor Racquet Club
Owner, Around the Netpost, LLC
in RRC news 0 comments
June 18, 2020  by Admin 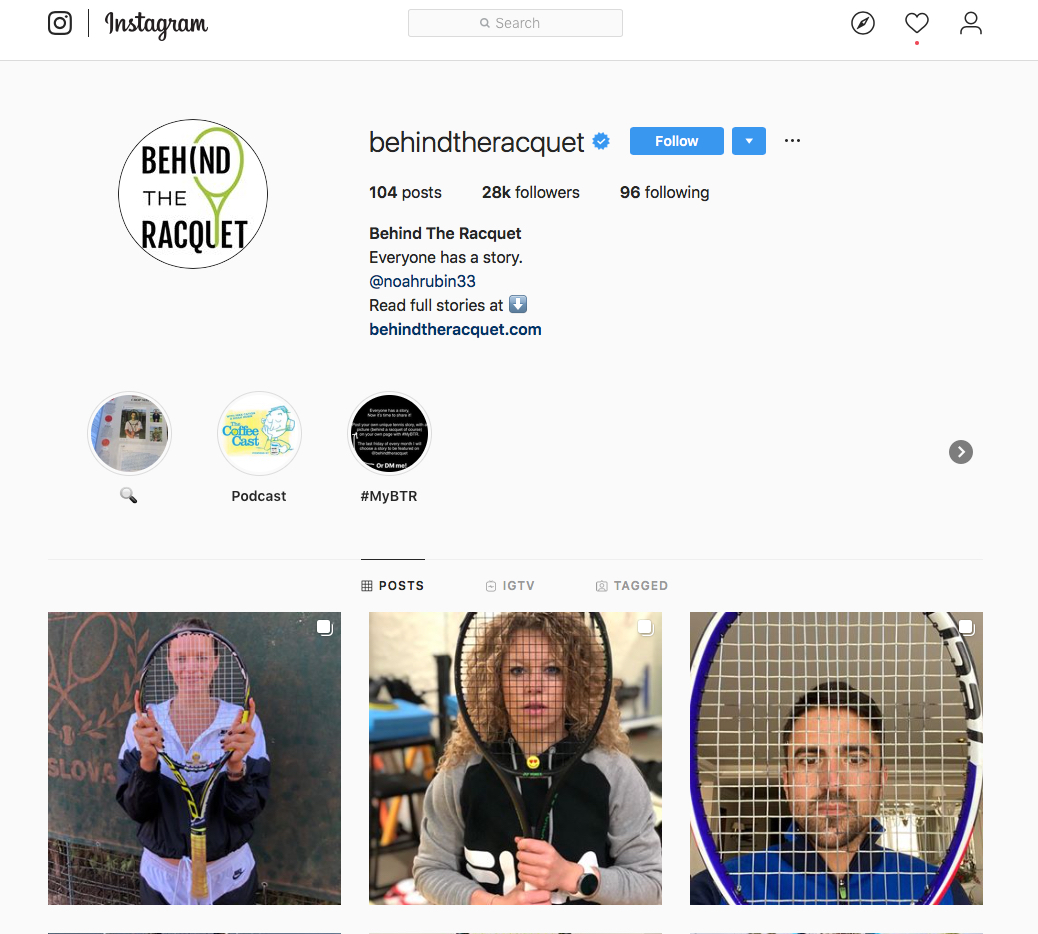 American tennis player Noah Rubin is giving fans a fresh, surprisingly raw, behind-the-scenes look into the lives of his peers in a new online project.

Rubin created the “Behind the Racquet” account on Instagram to give players an outlet to discuss their thoughts, insecurities and struggles, while simultaneously affording fans an opportunity to learn more about the person, not just the player.

The premise seems straightforward at its core:

Have the players pose in exactly the same way, holding their racquets out in front of them, left hand on top of the right, so that their faces are centered behind the racquets.

Then have the players discuss something meaningful to them and their journeys as tennis players.
“After coming back from Australia, I was watching an Instagram documentary on Netflix at around 3:30 in the morning, and ‘Humans of New York’ came across my Instagram. Then it clicked with me,” said Rubin, who was inspired by the photoblog-turned-docuseries, in which strangers are interviewed on the streets of New York City.

That’s when this idea came about. Just to really bring awareness to the people that surround the great sport of tennis and to bring the human-interest stories back and, most importantly, to bring spectators back into the world of tennis and get them involved in the players.”

As simple as the concept seems, the candid posts are much more complex, filled with authenticity, sincerity and passion. The reaction from both players and fans has been overwhelmingly supportive.

“People are way more open than I thought they would be,” said the 22-year-old from Long Island, N.Y. “My biggest fear was that I would offend them with the questions. But they understand that I’m not here to offend them. I’m just asking to get the best answers to allow them to use this as an outlet. I want to hear their story.”

Rubin (pictured above) launched the project with a snippet from his own tennis story, discussing his “most daunting fear” of letting down the people closest to him—his family and friends, who have sacrificed so much to help him get to the place he is today.

“The idea that it may not be worth it, or there might not be a way to repay them, haunts me at times,” Rubin says in the introductory post. Since then, he has shared first-person stories from seven other pros, with the promise of more to come as the season progresses.

Ernesto Escobedo spoke about a stutter he has had in his speech since childhood and how he has sometimes avoided speaking with people he didn’t know for fear of being the center of their jokes. Mitchell Krueger asked the hypothetical question of whether he’s doing the right thing in his career after seeing other people find success despite not apparently working as hard.

Chris Eubanks discussed the grind of traveling the world on his own, eating room service alone day after day, and Bjorn Fratangelo opened up about how winning the French Open boys’ title put him in an uncomfortable place in the limelight that he really wasn’t ready for. Earlier this week, Dustin Brown, who was born in Germany but spent his teenage years in Jamaica, shared his story about dealing with racism growing up and how he felt the need to change the person he was depending on whom he was interacting with.

“People don’t know what goes on behind the scenes,” said Rubin, who rose to a career-high No. 125 in the world last fall and is currently ranked at No. 150.

“To actually know the true tennis players and what we go through and to know what we think about and the mental struggles and just the struggles as a person individually, I think there’s so much to be learned and so much to be had from all these stories. People just need a platform, and I’m giving it to them.

“People don’t have an understanding what being No. 100 in the world means for a tennis player. They think we’re just private-jetting around and staying at the Ritz Carlton all the time and playing in front of 15,000 people. There are a select few of us [ranked] between 100 and 200 that have done that maybe once or twice, but for the most part, you’re playing at clubs that have few line judges and no ball boys. It’s the real deal.”

Two players, Jamie Loeb and Marcos Giron, shared deeply personal stories in their “Behind the Racquet” posts. Loeb spoke about the time she learned that her mother Susan had a stroke, while Giron opened up about finding out his parents were getting a divorce while he was in the hospital preparing to have an MRI on his hip.

“That changed my outlook on everything,” Loeb said of her mother’s illness. “Winning and losing a tennis match means nothing in the grand scheme of things.

It was tough. … It changed everything for me since I was always wondering if I was being selfish for being on the road and not at home helping. … This was something bigger than myself, bigger than tennis.”
Rubin said that as pleased as he has been with the response to his new series, he is even happier to hear the impact it has had on the players he’s interviewed.

“One of the best parts has been having Ernesto Escobedo come up to me and say he’s received so many messages of support,” said Rubin, who explained that most tennis interviews solely focus on on-court matters and never touch on what is meaningful to a person away from the sport.

“Having Jamie Loeb come up to me and say that all these people are so supportive, that’s what keeps me going.

“I want [fans] to have an understanding of what encompasses a tennis player. There are so many diverse groups, so much to love about the sport. Just giving these people a chance to speak their mind, there will always be a fan for that.

I hope people will start following these people now because they’ve heard their story and they know a little more about them and feel a part of them. That’s what I want people to take away from this.”
To see the full “Behind the Racquet” series on Instagram, click here. 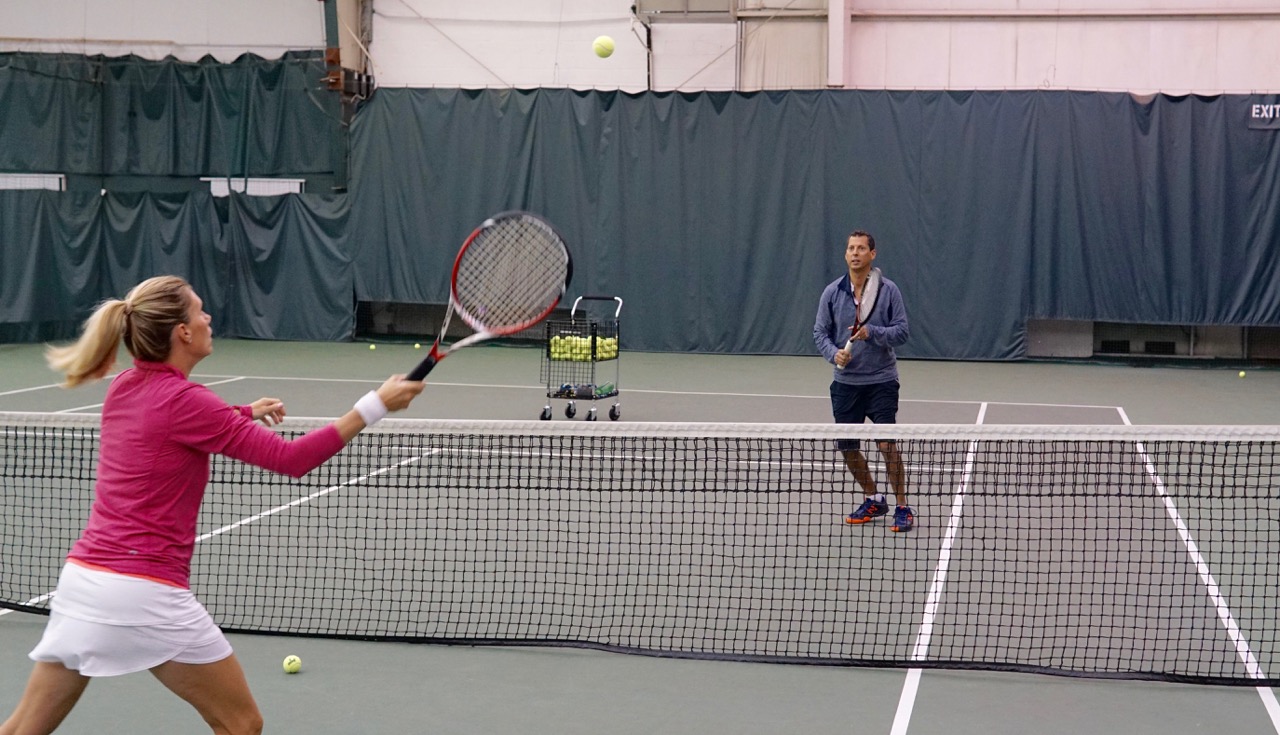 Tennis courts and lounge are available for Friday evening and Saturday evening parties.

Looking for someone to play with?

Looking for a sub for your group?